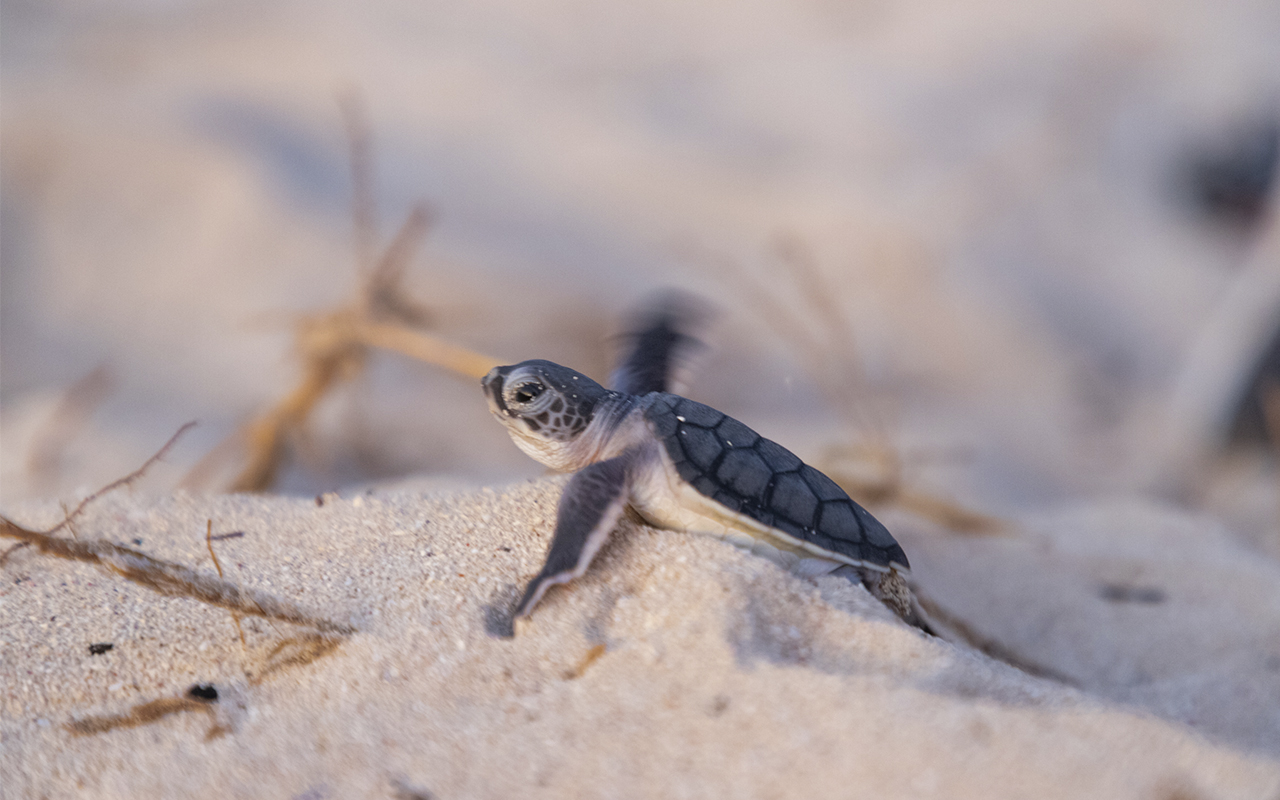 Thousands of turtles come back to the coast where they were born from April to October all across the Mayan Riviera to develop their process.

With the soft 5:00 a.m. lighting, the shadow of a 1.15 m female turtle, fighting to cover around 120 eggs, she has just put into the sand stands out upon Verónica Juárez’s sight. One of her main functions as a Puerto Morelos City Hall biologist is to register the many nests the turtles, that once we’re born at the Punta Brava beaches, return to spawn.

Before sunrise, 59-year-old Verónica daily walks two kilometers at the beach with a GPS that helps her to search the new turtle nests, and when it becomes crucial, she helps some of the turtles to get back into the ocean waters. “I oversee all the nests and make sure to help turtles that get stuck, and if their nest is damaged, I relocate it so the soon to be born turtles can be able to survive”.

The experience in her walking steps shows that she has been doing this for over 30 years,

she furrows the big holes that these long-living reptiles leave. Every now and then, she stops and lets the marks that turtles have left in the sand, show her where to move the sand to, to unbury the newborn turtles. “After 45 or 50 days of egg gestation, newborns break the shell of the egg and scratch the sand for over three days to reach the surface and usually reach the age of a hundred years”. Juárez explains.

The results of all this process are given to the Sea Turtles State Committee, and they study and share the results in national and international forums. During the months of April through October, which is the nesting season, Verónica usually registers around a thousand nests on this beach coast. A single turtle can spawn up to six times, which means she can lay around 600 eggs.

A very interesting fact is that the temperature that the egg is exposed to (this depends on the location inside the nest), will determine the sex the turtle will have. If it’s warm, it will be a female, on the other hand, if it’s colder it will be a male. Sex will be shown until the turtle is able to procreate at the age of seven or eight years old. “Copulation takes place on the coasts. Female turtles have a spermatheca where they can store the male’s semen for over a year, which allows them to get self-fertilized if they cannot find a male turtle”, Verónicas says as she registers the new nests she finds.

Six hours later, almost getting to the end of labor hours, Verónica registered 15 new nests. “We have a lot to learn from them, look at how tiny they are born. And the first thing they have to do is to walk towards the horizon and face the immensity of the ocean. We should be more like them” She says behind an honest smile.